A Recap of the August 18th Planning Commission Meeting

Citizens Speak Up - Voices May Be Heard 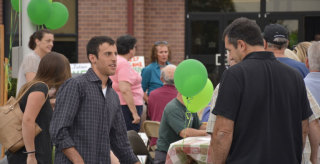 Talking to fired up residents before the meeting

Our meeting last night was well attended, drawing some 200 people. Outside was set up like our last big meeting at Garnet Valley Middle School, with protest signs, tables to take action and folks interacting in a hopeful and spirited way. Although the meeting was well-attended, there would have been more people - as you know the Supervisors scheduled a meeting for discussion of the Hall property on the same evening at the Township building. 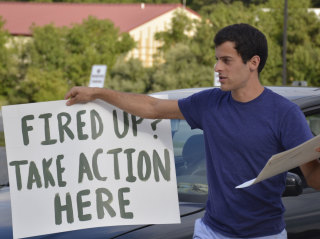 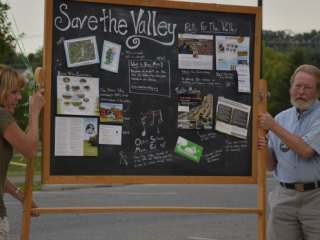 The developers’ plans were presented by John Jaros

The meeting started with a presentation by John Jaros, attorney for Woodlawn Trustees, and their engineers and consultants. It was the usual dog and pony show. A few notable (or should we say “highly questionable”) items came out of their presentation:

After their presentation, Planning Commission members asked questions, but Jaros and his consultants could not answer any of them with any level of specificity. It was also learned that Jaros has not responded yet to questions and issues presented by the Commission’s consultants. Therefore, the Commission granted an extension, and the next planning meeting will be October 20. Therefore, the September 2nd supervisor meeting is CANCELED!

Attorneys representing neighbors to the planned development spoke next

They were brief. They stated that because the developer had not presented a final plan or answered any questions, there was nothing to definitively respond to. The following was also stated:

The Brandywine Conservancy weighed in

Brandywine Conservancy is one of the most respected environmental and land protection organizations in the region. Their presence helps legitimize what we have all been saying since this process began.

A couple of dozen residents were given an opportunity to speak. Many additional points were made:

Last night there were many objections to Woodlawn's proposed development plans, and they came from many quarters. Please note that there is no longer a September 2nd Board of Supervisors meeting.