Yet Another Development Project is Proposed in Beaver Valley 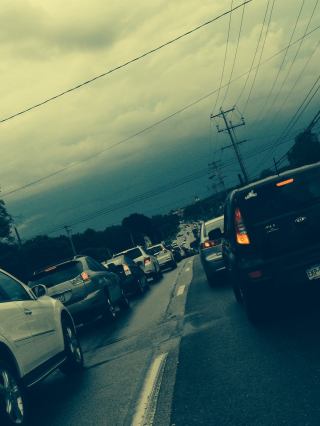 A brand new development proposal in Beaver Valley has popped up this month.  This is not the Vineyard Commons development that we have been fighting against for years, nor is it the Wilmington University proposal across from the Concord Mall.  The Woodlawn Trustees, the folks who were appointed by William Bancroft to preserve the thousands of acres he left for public enjoyment, are welcoming more development in the pristine Beaver Valley.  The trustees must figure that their reputation can’t get much worse, so they continue to haggle with those who would desire to take away public open space for personal gain.

As you cross the Delaware/ Pennsylvania border traveling north on route 202, glance to your left where Hadfield’s old building still stands and you will see a row of existing houses just past a grassy infield on Wadkin Avenue.  Behind that line of houses, hidden from view from 202, is the last farm in Concord Township.  Pretty corn fields grace the landscape and lead to a woodsy area just beyond. 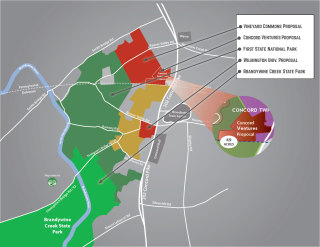 Location of the Concord Ventures Proposal. When this map was made, the plot was 49 acres and called "Concord Commons", but it has since been renamed and expanded to 60 acres.

Now imagine hundreds more people living there in three high rise apartments and 29 townhouses, a total of 196 new domiciles housing up to a thousand new residents accessing Route 202 on a daily basis.  Add yet another new proposed red light to the morass of existing lights while you wait for the residents to pour out onto 202.  That’s the spot.  Sixty more acres of farmland and woods gone from preservation, buildings looming over and impinging on the sanctity of the quiet acreage behind the new proposed development.  We wonder if this is what William Bancroft envisioned when he deeded the land for preservation and public use.

We can grit our teeth and take another blow while a few developers profit.  Meanwhile, this land which was put aside for us to enjoy is being whittled away, our roads are becoming more crowded and the existing weak infrastructures become more abused.  Guess who will end up paying for the inevitable road improvements?

What can we do?  It is probably safe to say that none of us reading this piece desire this new development.  But without community involvement, our land and the personality of our community will be distorted and forever mangled by outside developers who don't live here or care about our quality of life.

Get involved! Don’t just sit there and shake your head ruefully as you sit in traffic on 202, do something about it. Here's how:

First, tag your elected officials when you share this article on facebook so they know you care about keeping development out of the Valley.  Click the "share" button below, then tag any councilman, supervisor, senator, or representative that you're friends with on Facebook whom you would like to convey your stance to on this issue. When the share dialog pops up, use the @ symbol to inniate a tag.

Second, stay informed by following our facebook page (see follow button above) and joining the mailing list if you haven’t already.  In the near future Save the Valley will be initiating a membership campaign so that people like you can keep better informed and learn about ways you can participate in our efforts to stop this type of development.  Watch for that announcement and sign up and encourage others to sign up.

Third, attend public meetings and hearings.  The more bodies in the seats, the more it will be apparent to the officials who make the decisions that the public is aware of what is going on, and it will be harder for them to mask any secret plans that are counter to the public interest.  STV will inform you via email and the website of any upcoming public meetings.

When election time rolls around, those living in Concord Township can go to the polls and cast their votes for open space candidates.  We were almost successful in the past two elections, but fell short of our goal although we made a major statement by making the incumbents a little nervous when they failed to get their usual 100% majority (56% to 44% in our first attempt).

Those living in New Castle County, Delaware can vote for the open space candidates that we will endorse.  We are keeping a close watch on the sentiments of the New Castle County Councilmen and will inform our audience.  The more members that we have, the more weight our organization will have on their decision making.

Tell everyone you know about Save the Valley and our two other sister organizations formed for the same cause:  Beaver Valley Conservancy and the Beaver Valley Preservation Alliance.  Encourage friends to join our mailing list and membership campaign.  Even if they don’t live in the immediate area, their concern and participation can have an effect.

Write to your elected representatives and tell them your concern.  Mention STV in your letter.  Even Congressman John Carney is very much aware of our efforts, as is Governor Markell.  All levels of government in Delaware and Pennsylvania should be informed.  Our goal is to create an impact and present a large force that will have to be dealt with in order to proceed with development.  In the past, most of these developments were approved in small closed rooms with little knowledge by the public.  Our goal is to end this violation of public interest.

In closing, here are some excerpts from the Woodlawn Trustee’s own website describing William Bancroft’s vision that they themselves have violated:

“When William Bancroft looked toward Brandywine Hundred, his vision transcended this scene of natural beauty. He could imagine a future when the city of Wilmington would expand into the open land to the north. It was for the residents of this future Wilmington that Bancroft planned to preserve the unique beauty of the lower Brandywine Valley.  … In 1901, William Bancroft established Woodlawn Company, known today as Woodlawn Trustees, Incorporated.”

“For many years I have been saying I wished someone would gather up the rough land along the Brandywine above Rockland and hold it for the future Wilmington and I concluded that perhaps I ought to do something toward what I had been wishing others would do.”

“Things that I have much at heart in connection with the parks will not be completed during my life. I hope that Woodlawn Trustees will be wisely free in helping the public in regard to some of these things.”

“It has been a hobby or a concern with me, for more than twenty-six years, to endeavor to get park land for the advantage of the people of Wilmington and its vicinity.”

“Everything that we have has been given to us to use unselfishly as stewards.”

This is the woodlawn board. Know anyone?

If you do, call them and tell them you disapprove of them developing open space at the expense of the community! 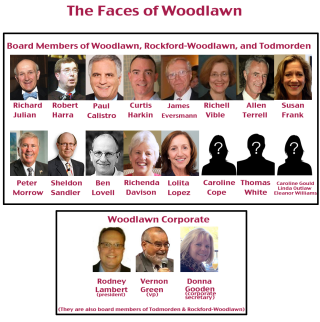 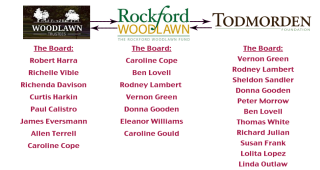